September heralds the onset of autumn, as this damp, cool and rather overcast summer fades I might feel a pang of regret if it wasn’t for the finale of colour in front of the house and the foil of ornamental grasses.

… it’s comforting to know the technicolour riot will last for several more weeks to come.

The terrace links to the round bed at the north gable end of the house, here the colours are anchored by a dolly mixture assortment of pinks to lead into the boundary bed of hydrangeas. The key grass in both this border and the terrace is Calamagrostis x acutiflora ‘Karl Foerster’, a sterile hybrid and for the most part raised from divisions. On the right hand corner of the bed above is a monstrous clump of Molinia caerulea subsp. arundinacea ‘Transparent’, weighed down by rain and obscuring the narrow path. The blue ‘dumpy pine’ blocks the view of the drive and this year’s new planting area. 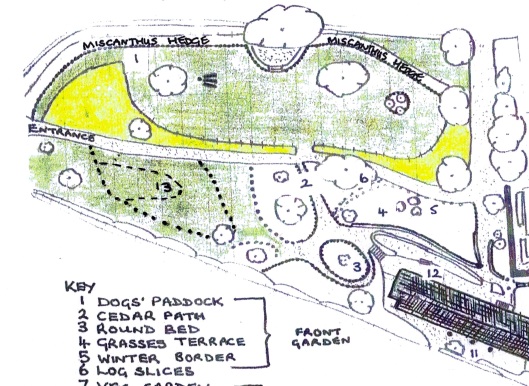 Shown as 13 on the garden plan, this is the stylised meadow of Deschampsia cepitosa and Molinia caerulea subsp.arundinacea that was planted in late winter this year from seed raised plants. Sitting to one side of the drive the roughly triangular area is only about 300 square metres, not vast but large enough to require a significant number of plants that I started growing for this planting in 2011.

The design took shape last year, as an arc of rough grass bisected by mown paths.

Last autumn the row of overgrown Leyllandii along one stretch of the boundary were felled, letting light and wind into the area, as well as allowing a glimpse of the valley’s hay fields and woodland. 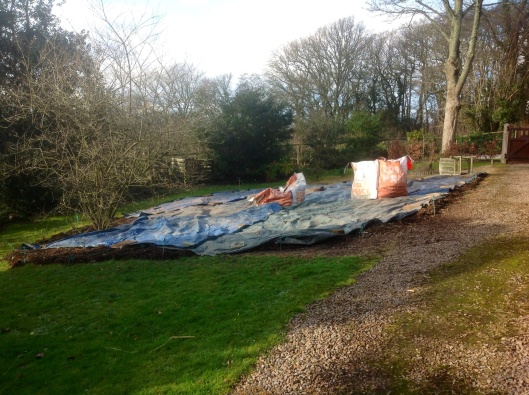 Our aim was to limit the work required to create the meadow, last autumn the turf was covered by layers of compost, cardboard, green woodchippings from the tree work and then covered with tarpaulins.

For the most part we planted without ceremony – there was no double digging. Only the molinia, as the longer lived grass, was treated with the courtesy of larger holes, back filled with sterile loam and treated to a generous mulch of fine horticultural grit in a bid to keep creeping buttercups at bay. 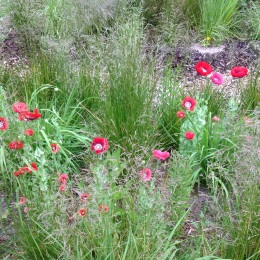 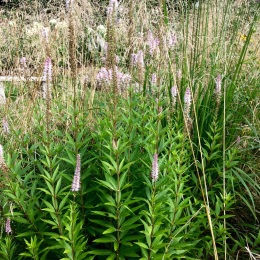 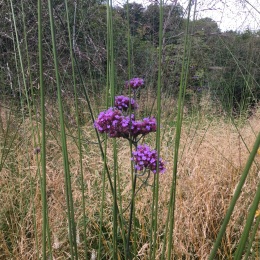 The results have been surprising. In early summer silvery deschampsia was studded with Papaver somniferum, bronzed by late summer it’s has been sprinkled with Rudbeckia ‘Goldsturm’ and Veronicastrum which was bought as ‘Fascination’ (but looks too pink to be such to me) and pixels of Vernbena bonariensis. Rising above the froth of deschampsia on linear stems are the molinia – the offspring of the ungainly clump in the round bed at the back of the house. Perhaps this is a better home for them to arch and wheel above a wilder and woolier planting.

The haze of fresh inflorescense of Purple Moor Grass is best appreciated against a uniform background whether it be a tall evergreen hedge, a mass of perennials, or a dark painted shed … anything to provide contrast. In this case, the sky will do.

Through the autumn the molinia foliage, stems and seed heads will turn a buttery yellow before dissolving in an easy to scoop up heap by December.

By mid winter, the deschampsia and perennial seed heads will be all that remains as a whispy reminder of this year’s performance. Plus, no doubt, a prolific rash of deschampsia seedlings in the drive. 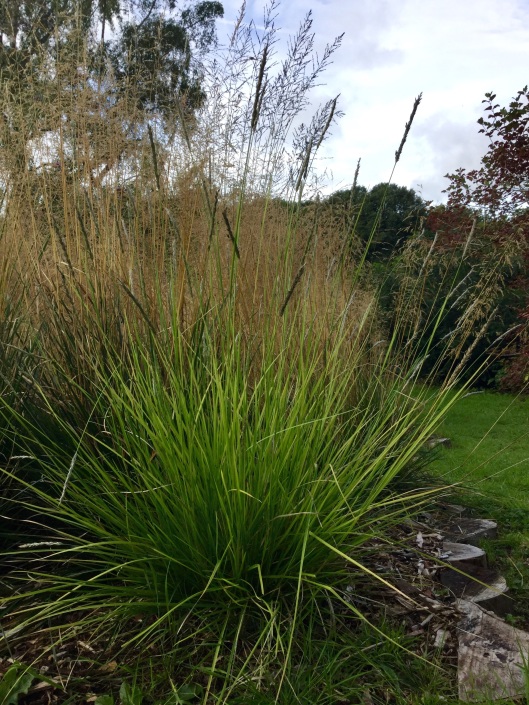 Planted on the corner of the meadow is a third grass that I have in mind for edging the meadow, like the deschampsia another near evergreen: the chartreuse leaved Seslaria autumnalis. I think it will contrast with the height, colour and form of the other grasses and conceal the thatchy tussocks of the deschampsia. 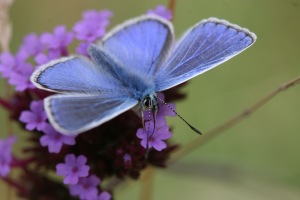 An unplanned finishing touch for the meadow has been the influx of the Common Blue butterfly that favours unimproved grasslands. In August 2013 we started noticing the colourful males cavorting in the dried stems of calamagrostis in the terrace in front of the house while the shyer, duller brown females nestled among the veitches and knapweed in the rough grass bordering the drive. This August much to our delight a colony of them has made the little slice of ‘improved’ meadow their home.

23 thoughts on “Splendour in the Grass”