The patio pots tucked away at the south end of the house transport us to far flung places.

Thanks to the steps leading down to the pergola shrouded in vines, the display to the right hand side is concealed from view until the last minute.

The ‘reveal’ is a surprise. In June the three groups of pots clustered either side of a wooden bench and the steps to the sitting room look generously spaced.

By September the planting burgeons in all directions leaving just enough room to sashay along the path.

On Sunday morning the sun shone, the temperature gauge on the wall soared and the colours sizzled. 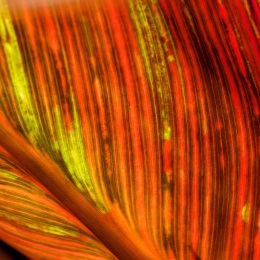 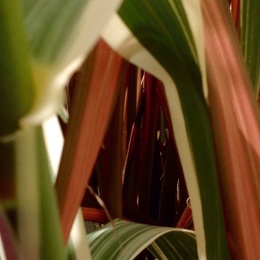 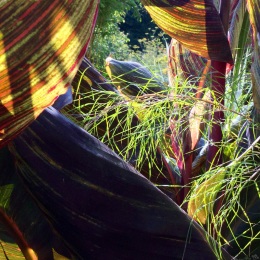 The display is a simple repetition of a few key plants. They have exotic looking foliage and yet are vigorous plants that are easy to grow : Canna ‘Tropicanna’, Arundo donax versicolour, and Phormium ‘Evening Glow’.

After several years, variegated Arundo donax towers to reach the wisteria. The Mediterranean giant reed is a remarkable plant capable of making this much growth in just one season, like bamboos the new year’s growth is taller year on year until it reaches maturity. The plain green form is hardy and ground grown makes a dramatic stand in a neighbour’s garden. 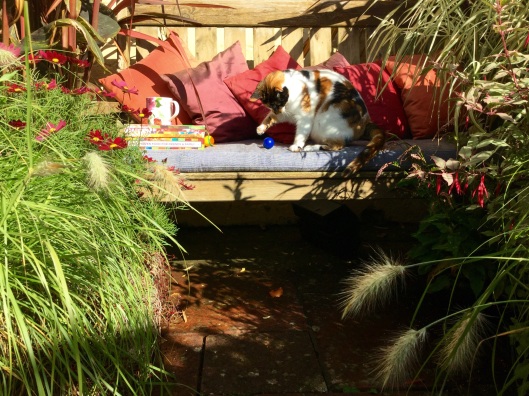 This is the area where we like to entertain on sunny high days and holidays, the cats magically appear whenever cushions are on offer.

The rest are seasonal fillers, one of my favourites is the tender perennial Cosmos astrosanguineus for the way long stems lace through neighbouring flowers and foliage. This year’s flowers have been especially dark, almost black in bud. 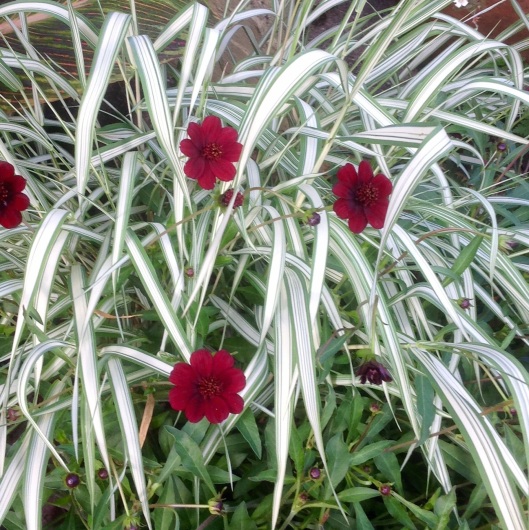 Last year a different batch of plants showed as a rich ruby colour. I have over wintered them in the greenhouse but they seem to take longer to flower and fill out.

Every year there are variations, this year the first batch of half-hardy annual cerise pink cosmos was weaker than usual, by June quite a few plants had failed, I replaced them with unknown darker reds from the local garden centre. 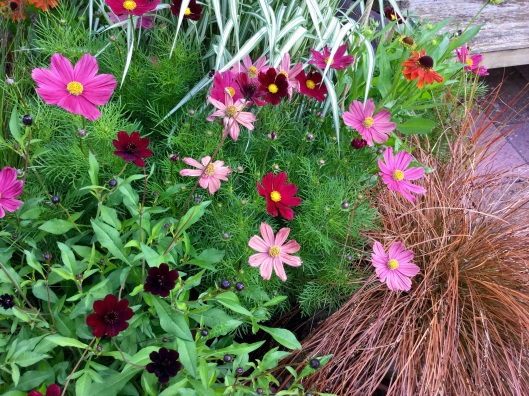 I like the way it fades from mahogany red through to a dusky pink, with shorter stems it’s been great in pots too. The closest match I can find is Sarah Raven’s description for Cosmos bipinnatus ‘Antiquity’, I’ll order a packet of seed to sow next spring. 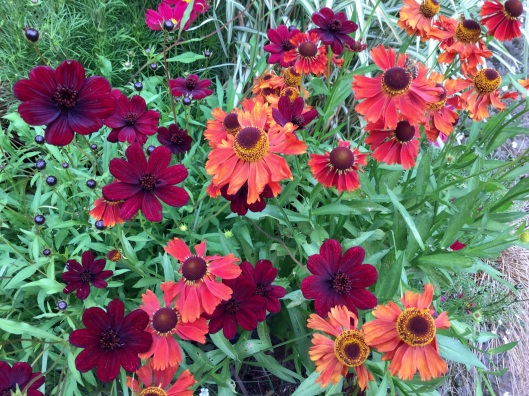 This year wanting orange earlier in the summer, several Helenium ‘Moorheim Beauty’ were added, they flowered well until September but despite being fed, watered and dead headed they seem to be grinding to a halt. As hardy perennials they’d be better planted in a border, leaving me looking for alternatives to augment next year’s display and a permanent home to keep the ‘sneezeweed’ happy. 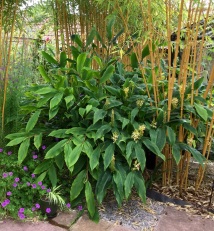 The mid storey is always trickiest to fill, in 2013 gingers lilies worked nicely for a season. However the dappled shade and sheltered spot near the green house suits them better, the handsome foliage scorched and looked less luxriant in direct sunshine. Now they are bursting out of 30 litre pots, although they’ll be ready to divide next May both flower better if slightly conjested. Like cannas theses are greedy, thirsty plants and keen to thrive. They would be hardy planted in the right spot, especially if given protection from winter wet. 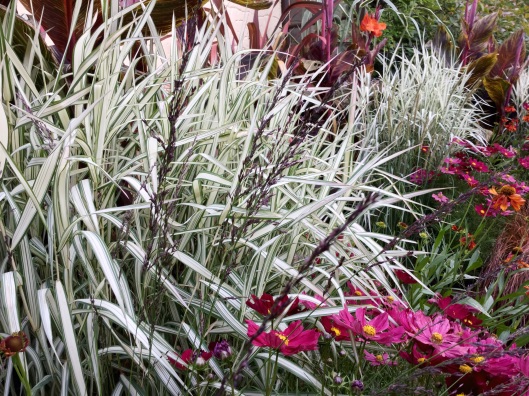 In their place, are yet more grasses and grass-like plants. Phalaris is great value for volume and presence from June onwards, fountains of toothpaste white offer contrast and drama. Wanton spreaders like this gardener’s garters often make fine pot specimens and are tough enough to tolerate neglect. Many of my container grown grasses have been growing in the same soil for many years, I’ve run out of enormous pots and I don’t want to keep dividing mature plants when they’re otherwise looking good. Last Friday I was reminded of a neat solution to this problem.

Image from ‘Designing with Grasses’ by Neil Lucas (Timber Press, 2011)

Knoll Gardens won 10 Gold medals at Chelsea so it follows that Neil Lucas is a master at cultivating show stopping pot grown specimen grasses. He shared many of his top tips at Friday’s local garden society talk ‘More Wow & less work : Grasses and their place in the garden’. What a great evening, I came away with the lots of inspiration plus two trays of Seslaria autumnalis plugs I’d ordered. Neil recommends reinvigorating a fibrous rooted specimen by slicing off a third of the root ball, then replenishing the soil. This should be done only when plants come into active growth, which varies depending on the type of grass in question. I’ll tackle the phalaris next spring.

Two weeks ago the sun loving, borderline hardy Pennisetum villosum joined the party, first brought to full flowering point against the warmest west wall behind the house they are now positioned to catch the light and the eye. The results are a great improvement on its performance last year, especially the ones shaded by the pergola.

Finally, this is where I keep an eye on special sundries. Quite often these are gifts from green fingered and thoughtful garden visitors, among this year’s treasures is a cutting of Salvia ‘Phyllis’ Fancy’ given to me by Helen Johnson aka The Patient Garden when she visited the garden in late August. A couple of weeks later, I enjoyed seeing Helen’s own hardy-exotic garden and meeting the stunning parent plant, she wrote about this salvia in last Saturday’s post My Garden This Weekend. The grey green leaves with purple ribs blend beautifully with the Pennisetum ….

Towards the end of October the foliage of the tender perennials becomes blackened by frost, this is the time to haul them back into the nearby frost free greenhouse. The cannas and ginger lilies are cut back to within a couple of inches of ground level, labelled to save confusion next May, and dried off through November. Joined by the large pots of Pennisetum villosum (that are left with top growth intact) there’s just enough room to squeeze in dreams for next year’s display alongside sentiment for times past.

Divisions of my late grandmother’s Haworthia are still being passed around the family some thirty years since she grew it in her seaside conservatory.