Until this week I had been putting off a couple of winter jobs in the front garden, partly because a photographer was working in the garden on a last minute winter set, and, partly because I wasn’t quite ready to say my goodbyes. The first was to start cutting back the mass plantings of grasses, starting with the terraces in front of the house; and, the second, to have the ailing blue cedar felled to the ground.

This journal entry is about how this particular tree came to be the focal point of the front garden. The blue cedar is the second, tallest, and rather gaunt looking conifer from the left shown in the image above. 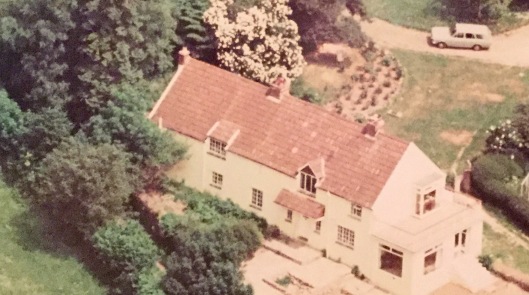 In 1970, when the house was a commune, the cedar was tucked away in the right hand side of this arc of conifers that ringed the north end of the house. Possibly it’s behind the one cloaked with a rambling rose. Perhaps they were intended as a shelter belt. If so, they were planted very close to the house.

By the time we moved here in 2006 only four of them remained. On the advice of the surveyor the tallest (a conical shaped green cedar) was felled, leaving the stump to the left. At the time the photo above was taken in 2010, the blue cedar sat behind a billowing Scots Pine in the top right hand corner of the frame. Perhaps the pine had sheltered it from the northerly valley winds, which regularly hit 50mph, as well as the harsh winters of 2010-11.

In the summer of 2011 we started drawing up plans to remodel the front garden, starting with the rocky barren slope in front of the house. One of the first things we considered was which of the trees we’d build the design around. We also had to consider which of those had either outgrown their space or were on their last legs. The very first teatime sketch of the slope in front of the house shows the blue cedar (green pin) at the midpoint of concentric terraces, with the diseased pine to be deleted.

Plotting each and every tree, slope, and sightline etcetera on a structural plan led to curving parallel stone walls that echo the contours of the valley hillside. The position of the cedar is marked by an eggcup, the dashed line shows the all important extent of its dripline. From the scribbled jottings on this enlarged section of my dog-eared plan I can see I was jumping ahead, noting ideas for the fun bit – planting, including nearly a dozen small ornamental trees to replace those that had been lost.

To my mind’s eye, the late summer colour plan looked ‘right’ with the statuesque blue green tree as the centrepiece.

Six months later, the ground work was completed and the new terraces, which taper to ground level just beyond the dripline of the tree, were ready for planting. This image is not flattering to the tree, taken at this angle it shows that the cedar’s shape had suffered, its ‘skirts’ had been lifted leaving 3 metres of bare trunk. Planted as it was so close to the drive, lower side branches had been snapped off by successive passing builders’ lorries or removals vans. Branches on the opposing side were lopped off to balance the shape. A knowing visitor once wryly observed ‘such is the fate of a parkland specimen in a modest sized English country garden’. 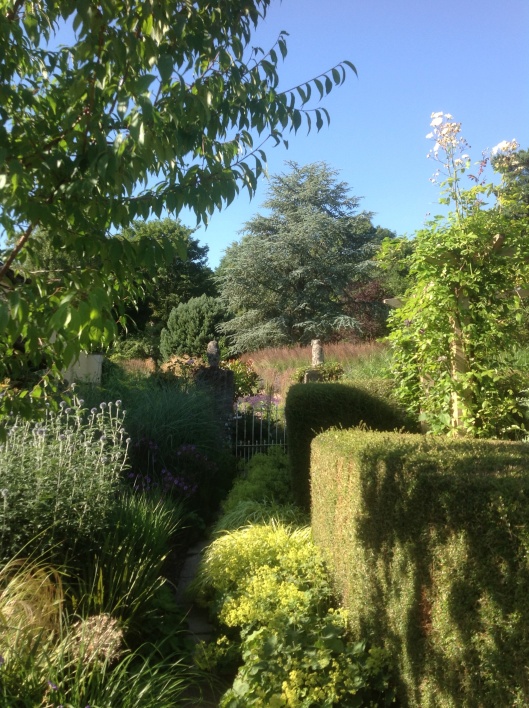 The tree at its bluest and most beautiful best July 2013

Once the areas around the tree were planted up the tree sat more comfortably in its new surroundings. Personally, I liked the shock of the vibrant blue rising above the technicolour summer ‘prairie’ planting, and, I liked the way this jolly blue giant arched its long limbs in greeting across the garden. One way or the other, the cedar worked its way into practically every image, often boldly so. But sometimes the effect was more subtle, perhaps a feathery bow fringing the roofline of the house, or, extending like a finger across either a path or the planting below.

Then, midway through 2014, the tree turned an anaemic looking green colour before shedding abnormal quantities of rusty coloured needles. The advice was to monitor it for a year and in following it closely in its decline I came to appreciate the not so blue cedar all the more, knowing that if we lost this particular tree the garden would never be quite the same again. Even sadly defoliated, minus its lush blue mantle and brittle limbs on show, the tree in its entirety still possessed a certain graceful charm.

So, the decision to fell a 50′ tall tree, that must have taken nearly as many years to grow, wasn’t taken lightly. Short of leaving it to die back further, and then perhaps turn it into a totem pole, we felt we had no option but to call in the best tree gang we could find. They were brilliant, so gently was the framework dismantled that to my amazement not one cyclamen nestling among its roots was damaged in the process. 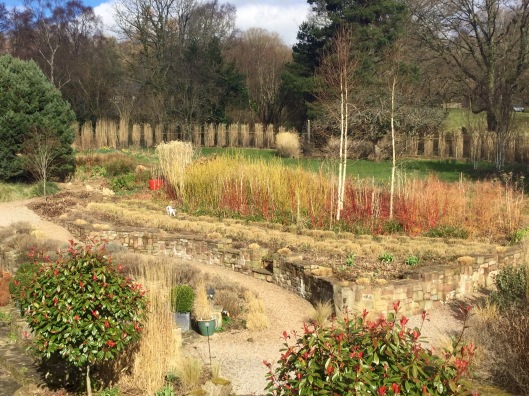 This is the same view from the apple barn steps as in the opening image, I take a shot of the garden from here at least once a month for my records. This is the first in which the cedar doesn’t feature, a red trug sits on its stump as a marker. The terrace of grasses, rudbeckia and nepeta has been cleared too, revealing the cheerful mix of dogwoods, birches and luzulus. Just as I was studying the gap left by the missing cedar, we had some good news : the photographer’s set has been accepted by a magazine for publication in late winter 2016. I shall be looking out for a glimpse of the blue cedar among the images that the editorial team select.

20 thoughts on “The story of the big blue cedar”