New Zealand Snow Tussock grasses are among the most beautiful evergreen grasses, especially in winter. Yet these grasses are rarely seen for sale in the UK and it seems that growing them from seed can be a bit of a lottery.

“I see again the upland wilds, stern, rugged, bleak and bare;
The strong winds sweep o’er hill sides steep
And the tussocks toss in the icy air,
Silver and gold in the changing light,
Gold and silver far-up on height
Of the mountain wild and bare.”

David McKee Wright (1869-1928) was an Irish-born journalist, on his arrival in New Zealand he worked on two farming stations in South Island’s Otago region. This extract from his nostalgic poem The Open Country recalls the magestic sight of vast, wild colonies of these grasses. Clearly, he was badly smitten.

Just gazing at jaw-dropping images such as the one above, I fell for their charms. 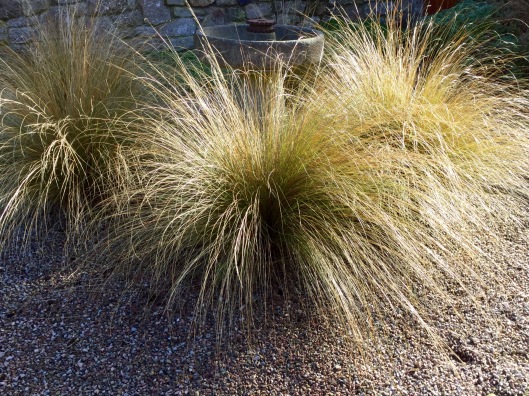 My much more modest version, a group of five down in the yard, have yet to reach square-metre maturity. I wrote about them last year in a post Easy Evergreen Grasses. At that time I grew two snow tussock grasses, one red and one green leaved form.

These magnificent two-metre tall specimens were a generous gift from a friend, they’d been grown from NZ seed supplied as Chionochloa flavicans. Even in late winter their flowers are stunning. 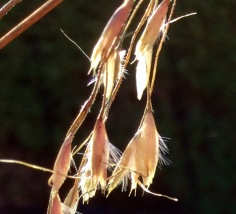 Close up of the same

Throughout the course of 2015 it became apparent that they may in fact be an entirely different species of chionochloa, the alternative green leaved species being flavescens or conspicua. Perhaps there was a clue in the specific epithet itself? 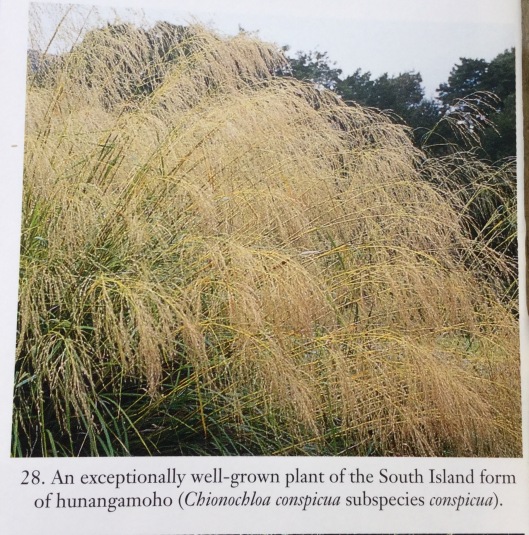 Conspicua possesses the most conspicuously showy flowers. In February, a seriously grassy minded friend lent me an excellent handbook, Lawrie Metcalf’s The Cultivation of Native New Zealand Grasses (Godwit, 1998). As well as containing good quality plates of mature specimens, it’s packed full of useful information about lots of NZ grasses many of which are widely known in the UK. It’s a shame that the second edition of 2008 is unavailable in the UK.

These are the other two green leaved forms. At a glance they look less similar to the ones gracing my patio steps, and, the closer you look, the greater the differences between them.

Metcalf’s botanically detailed observations plus line drawings have been very helpful, he describes two subspecies of conspicua, one of which is named ‘cunninghamii’.

Metcalf states that Chionochloa conspicua subsp.conspicua is distinguished from C.c.subsp.cunninghamii “by the basal leaf-sheaths being rather flattened and silky-hairy, while those of the latter are more rounded and smooth.”. This was exciting news to me. 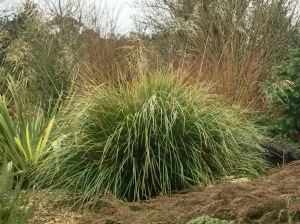 Especially as I bumped into a lovely one bearing a proper (if broken) label in a bona fide planstwoman’s garden back in December. I wrote a post about my visit to this garden, Pinetum Park and Pine Lodge Gardens here. What I thought, pre Metcalf and the all important hairy ligules, was that the flowers looked different from those I had at home. The panicles were more upright and the flowering spikelet airier … the leaves looked broader too.

All of this might seem a bit dry and dusty, but it raises some important questions for an amateur collector like me. Who’s say-so or what information can I trust? I assume trusting Metcalf is a safe bet, he is pre-eminent in the world of hebes in particular and an authority on New Zealand flora in general. His outstanding contribution to horticulture is internationally recognised : he was awarded the prestigious RHS Veitch Gold Medal of Honour in 1991. Then, in 2010, he was appointed as a Companion of the Queen’s Service Order (QSO) for his community service in posts such as Assistant Director of Christchurch Botanic gardens. Ever helpful, Wikipedia has a link for an NZ government page which explains the symbolism of the modern QSO badge : inscribed above the native Manuka flower is the commendation ‘For Service – Mō Nga Mahi Nui’ ; it’s suspended on a ribbon in traditional Maori colours (black, white and red); and, while the stepped pattern refers to the steps of service it’s also happens to be a common Maori motif for the steps to heaven.

I’ve really enjoyed my winter reading odyssey, I’ve come across lots of interesting stuff along the way. Based on Metcalf’s observations, I’m updating last year’s post to Chionchloa conspicua. Armed with a hand lense, sleuthing for botanical clues in my own plants was fun. However, on a fine spring day watching the way the remains of last year’s airy plumes nod in the warm breeze and catch the light remains the greater pleasure.

By way of a postscript : a good range of chioncohloa is available from Jelitto Seeds and Plant World Seeds.

With thanks to Tawapou Coastal Natives for the image of Lawrie Metcalf, here is a link to their post ‘A Visit from Lawrie Metcalf’, 1st September 2015.

23 thoughts on “Chionochloa : A Case of Mistaken Identity”