Sailing merrily through April, Chaucer’s uplifting take on spring burbles away in my thoughts like the comforting murmurings of an old and dear friend.

Meanwhile below ground there’s a gathering crescendo, each day a little more growth unfurls in response.

As the season ratchets up a gear I weed and dig, divide and replant with a greater sense of purpose. Last week, I rejigged the greenhouse to accommodate 18 pots of hastily purchased then speedily planted dahlia tubers, having never grown them before, I followed Sarah Raven’s How to plant dahlias. The tubers, Bishop of LLandaff, came from Avon Bulbs, they’re destined for the late summer/early autumn display of patio pots. 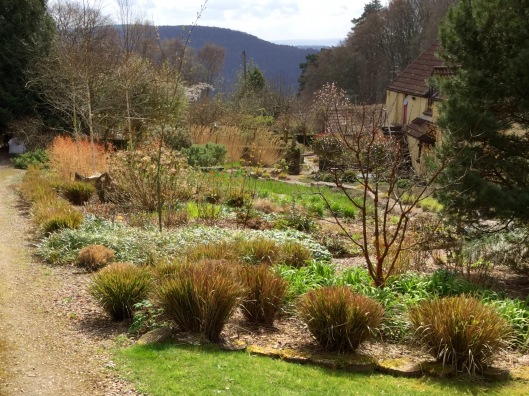 Stripped back to the bare bones of its design the front garden resembles a stage set, finally it’s starting to look as though the garden is ready for the year ahead.

Mia inspecting the terraces prior to the morning’s work.

The last job was a shrubby one I’d been putting off until the very last mid-April minute : coppicing the jaali screen of red, lime-green and orange Dogwoods, they line the winter garden on the upper terrace in front of the house.

Helping hands busy in the thick of it.

However, this week I’ve been enjoying some very special company in the garden, my father and his wonderful wife are visiting all the way from southern Ontario. Extra pairs of happy helping hands are most welcome at this busy time of year, between us we’ve cleared the thicket of multi-coloured cornus in no time at all.

When they set out from home there was still snow on the ground – the late winter sort that quickly turns to salty brown slush. In early May I’ll weave the prunings into supports for the rudbeckia hedge, by then I’ll be wondering if their garden is fast-forwarding to high summer. 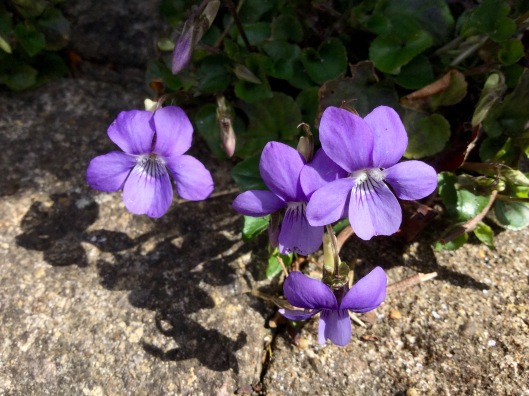 Which reminds me to celebrate the fleeting springtime blessings bestowed by our mild and gentle temperate climate while I can. At such a busy time of year it’s easy for me to overlook the demure charms of wild violets lacing their way through the cracks in the paving at the foot of the Lonicera nitida hedge. 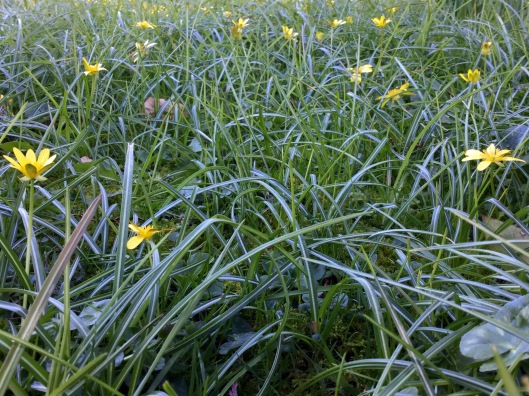 Here on the rural Welsh borders my so-called ‘lawns’ are verdant pools of mossy green studded with tiny treasures. Between the shady double set of main gates, the patch is densely packed with Crocus tommasinianus, I see the adventurous lesser celandine has crept in amongst them.

In spring 2006, when we viewed the property, the garden was a riot of blowsy blooms. We tease each other that we’d made our minds up before we reached the front door. Aina’s exuberant mixtures of daffodils, planted with ardour in the 1990s only to be corralled by me a decade later, are still the hallmark of the season in my garden. Among them, the paler or daintier ones are my favourites.

Only those in the orchard are as my predecessor left them, perhaps this year I’ll find time to move some aside to create a navigable path through the orchard.

Moving the masses that once filled the dogs’ paddock left me with a green swathe of grass, not to mention a seasonally sore Achilles’ tendon. The shorter, sturdier wild narcissus pooled under an old red leaved cherry tree bounce back from this treatment better than our furry tank’s ancient football.

When in April the sweet showers fall
And pierce the drought of March to the root, and all
The veins are bathed in liquor of such power
As brings about the engendering of the flower ….

This is the poetic earworm of opening lines from Chaucer’s The General Prologue, translated by Nevill Coghill.

The first of several pre booked groups of NGS garden pilgrims will arrive in several weeks time in search of flowers, foliage, tea and cake. This year our ‘big day’ is Sunday 26th June, we’re delighted to be joined by Greenfields, a beautiful new NGS garden created by Jackie and Fintan Healy who live just down the lane. Spring is nature’s prologue to another busy, thrilling, and, paws crossed, successful gardening year.

This morning’s brief flurry of plump snowflakes was a lovely surprise!

25 thoughts on “April is the sweetest month ….”