Bluebells are the quintessential wildflower of spring. Surely, the sight of an ancient forest floor carpeted in violet-blue is among one of the wonders of the natural world? 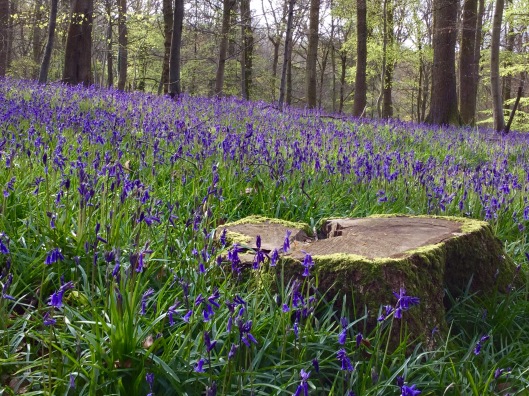 Traditonally the Early May bank holiday weekend is bluebell time, where we live on the border between south Gloucestershire and Wales we are spoilt for choice as to where to see them at their peak. In the woodlands of the Lower Wye Valley they have been flowering for over a fortnight, whereas in the nearby Forest of Dean, thanks to the higher altitude and cooler climate, the bluebells lag behind by about two weeks.

Yesterday morning we set off bright and early to Blakeney Hill Woods near Soudley, one of our favourite spots for quiet woodland walks with the dogs. Wide forestry commission roads and public bridleways criss-cross the woods.

Bluebells are said to start flowering from St George’s Day

Despite the celebratory bunting strewn around a stout beech tree and a poster advertising teas in the local church the bluebells in this wood were not yet fully open. The woods were deserted and with a cool start to May we can hope for a couple more weekend walks in the bluebell woods before the understorey is engulfed in bracken and the tree canopy closes for another year.

This year the signs of the barrage of late winter storms were all around, with piles of brash and side boughs littering the forest floor. Where the rides were blocked the brash has been moved aside.

One or two old veterans have succumbed to successive winters of wet, windy weather leaving surreal living walls. Here bluebells, foxgloves and moss cling to the turfed up rootball.

Besides the charismatic bluebells, the woods are full of other tiny treasures making it interesting to see how the bulbs fare in their natural habitat. Since we started visiting these woods nearly fifteen years ago things have changed a bit.

We grow Deschampsia in our meadow, under cultivation it doesn’t look like this ….

In certain places Deschampsia cespitosa, a clump forming semi-evergreen grass with a vigorous self-seeding habit, has migrated from the network of damp ditches towards the heart of the forest floor. Elsewhere yew seedlings have grown into stout young trees that shade out everything including the bulbs.

White form of the common bluebell or Hyacinthoides non-scripta

Pink or white bluebells are uncommon, the contrast in colour makes them stand out from the crowd. This one growing in the woods near Soudley bears the hallmarks of our indigenous Hyacinthoides non-scripta with its delicate drooping flowering stem and one-sided racemes of up to a dozen or so nodding recurved flowers held elegantly above narrow foliage.

Bluebells in the garden growing under a hedgerow

My guess would be that at home in the garden we have the results of a mix between the native bluebell and its more vigorous Spanish cousin, Hyacinthoides hispanica which was introduced to the UK in the late 17th century. In 1909 it was first recorded as having naturalised in the wild. Although the two species are quite distinct, their hybrids, which were first recorded in 1963, can be hard to tell apart from either parent.

Perhaps puzzling over the degree of scent or fusion between the anthers and perianth, or the colour of tepals, let alone tint of the pollen in the hybrids may be best left to skilled botanists or DNA analysis. To the left is a neighbour’s probable H.hispanica, to the right an interloper from my garden’s hedgerow.

Most of the country gardens around here contain inherited clumps of Spanish bluebells dating back to a time when the wisdom of planting them in a rural setting wasn’t questioned. I pass this naturalised display every day, with their taller, upright stems, broader leaves plus paler, shorter bells arranged in a radial fashion you’d think they’d be recognisable for what they are at a glance. 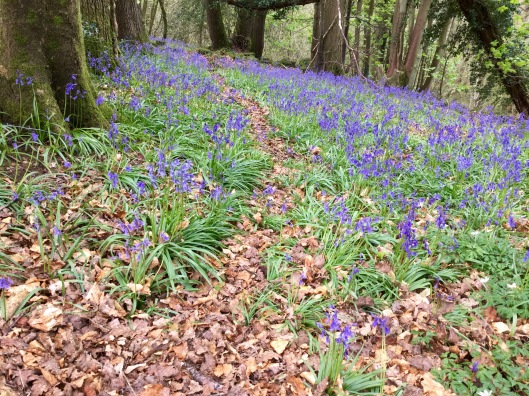 Bluebells in the Hudnalls Wood

Across the lane and a short stretch of field beyond that, is the historic Hudnalls woodland. Composed mainly of beech it remains a typical home for bluebells. Following the enclosures of the eighteenth and nineteenth centuries the commons were apportioned into smallholdings for pasture, orchard and meadowland. Bluebells persist in our gardens today to the extent that some regard them as a nuisance and turn to the RHS Bluebells as weeds for sound advice. It’s curious to think that the cottars might have pulverised bulbs from the neighbouring woods to starch their washing.

The margin between the wood and field

Even if the ocean of bluebells shimmering on the local woodland floor or threading their way along the field margins and hedgerows are the hydbridised Hyacinthoides non-scripta x hispanica, syn. H. massartiana, I think they are still a charming springtime sight.

According to Plantilfe International’s report Bluebells For Britain the UK is home to almost half of the world’s common bluebells. Apparently, at the time of the 2003 survey, one in six of our woodlands contained a proportion of hydbridised bluebells. Apart from the ‘threat’ of competition from non-natives, the report highlights : habitat loss; the unsustainable and, if for sale, illegal collection of bulbs or seed from wild populations;  and, possibly, climate change as factors endangering what was voted as being Britain’s favourite wildflower.

24 thoughts on “A Walk in a Bluebell Wood”