When I’m asked why I made this garden I reply I simply wanted a room with a view, not not just for myself but for the dogs who were otherwise fixated by any passing interest on the lane so they might enjoy a volley of woofs. Airedales are like that😉. 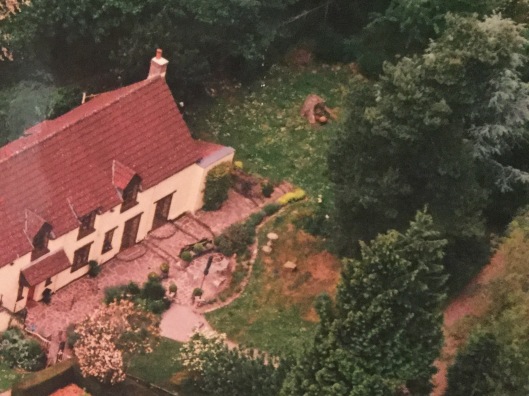 The gentle, rocky slope in front of the house 2007

Personally, I was fed up with looking up the awkward rocky slope to the gates across from the drive lined with parked cars, not to mention the yellow sticker on the neighbouring electricity pole. Arcadia, it was not.

It took me several years to grow the mainstay of hundred of grasses : standard forms of Calamagrostis x acutiflora.

This was the ground preparation for planting our grasses in 2007. It was a lot of hard work.

Year after year I divided them out, while their numbers increased, it gave me time to figure out what I’d plant with them and how I’d arrange them to create a view that felt in keeping with the gentle valley slope. It also had to look good for most of the year with as little extra help from me as possible.

Knowing the slope was exposed to each and every passing wind, I didn’t want plants that would keel over with the slightest gust nor those that gave up the ghost in high summer. I wanted something that was so very simple, so pared down to the essentials, that the view would delight me in each and every passing season.

As a bemused friend observed in the late summer of the terraces’ first year in 2012, “but” it is just the same plants in lines with the odd block of Periscaria amplexicaulis thrown in for bee friendly colour. Her “but” lodged in my mind, because, yes, the planting was really that unsophisticated.

The improved dogs’ eye view from the kitchen September 2016.

Miraculously, for the most part, it works.

For at least 10 months of the year I have my longed for room with a simplified view and we are all quietly contented. From late summer through autumn the planting sings its dazzling technicolour aria accompanied by the joyful thrum of happy bees.

But, to be honest, the reason I’m writing this now is that, one of our very dear dogs is so very unwell I really can’t say if she will make it or not. So much of this garden has been built around the two of them. Our two furry tanks have been such an inspiration.