Over the last week or so I’ve been dismantling thirty odd patio pots at the south end of the house. Partly, to clear the decks for the painters who need access to the windows and, partly, in preparation for loading the containers into the greenhouse for the winter. As it marks the end of the season for this bit of the garden, it’s not a job I relish, especially when it still looks good. However, little did I know : this year I was in for a pleasant surprise. 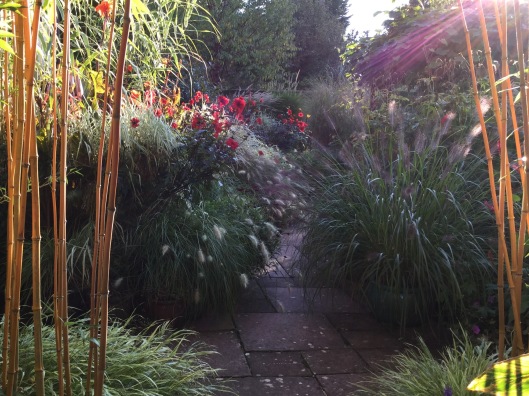 On Thursday, with all the cutting back done well ahead of time, I took a deep breath and armed myself with the optimistic floor plan with which to brief the two strapping young men who were going to haul the pots of tender and borderline hardy exotics into the greenhouse. 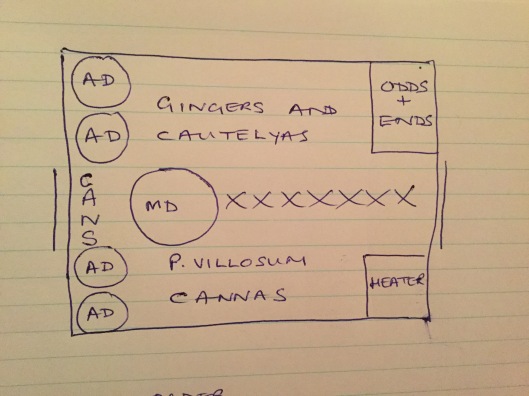 This is not a job for the faint-hearted, the pot sizes for the Arundo donax and Muhlengergia dumosa are 75 litres apiece and the remainder average 50. Totally unfazed, they cheerfully got on with it leaving me to sweep up the bamboo leaf litter in front of the 8’x10′ greenhouse. Hidden under a cloak of summer greenery, it forms quite a deep layer around the pots of gingers and cautelyas. 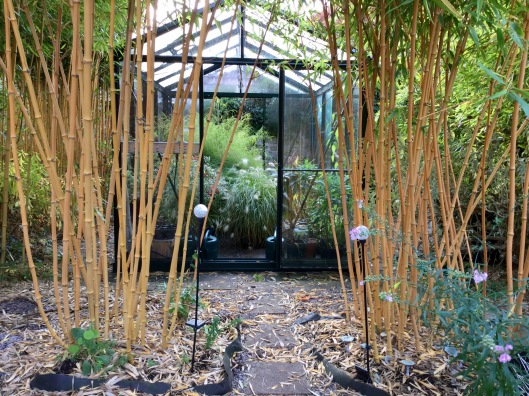 As I reached for the broom I spotted a rash of startlingly blue mushrooms at the base of the bamboo stand to the right. 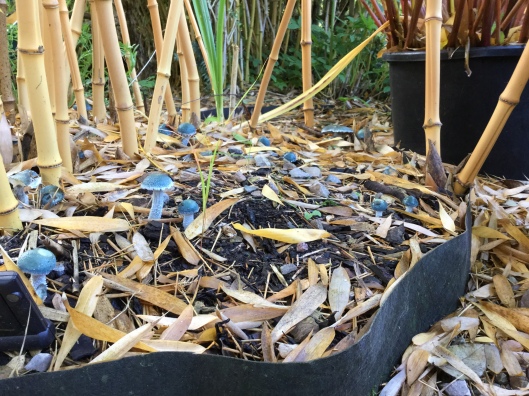 I just had to take a closer look ….

Newly emerged from the mixture of leaves and bark mulch, the rounded young caps looked distinctly slimy. Older caps are first scaly, then less smooth with traces of a white veil showing at the edges. Although the caps loose the lustrous appearance as they age they are still an interesting sea-green colour.

I couldn’t resist picking a couple for closer inspection. The details of the reverse sides are quite delicate and equally beautiful.

Turning the cap over the milky coffee-coloured gills are distinctly notched where they meet the stalk. The stalks are pretty too, with streaks of a more cobalt blue against a shiny white background. In the older mushrooms, faint traces of brown spores collect in a ring towards the base of the stalk, below that the surface is covered in scaly down and flecked with soil.

Wondering what they could be, I googled ‘blue mushrooms’ and came across a very helpful website, First Nature. Identifying mushrooms or toadstools can be a minefield  but as there are only a few blue mushrooms in the UK it wasn’t quite as hard as I expected. Of these, the ones in my garden are recognisable as either Stropharia caerulea Kreisel or Stropharia aeruginosa, although they look very similar, especially in colour, a good guide can help pinpoint the subtle differences between the two. It comes down to each species showing differences between the rim/gill and gill/stalk edges. These turned out to match the Blue Roundhead rather than the Verdigris Roundhead mushroom.

Like the vast majority of mushrooms, these are respectively noted as being inedible and, possibly, poisonous. They’re for ‘looking not cooking’.

As it seemed a shame to waste the ones I’d picked, I decided to see if I could catch a spore print. It’s not hard to do and is fun try : select a fresh, fully opened mushroom; place downturned caps on a sheet of stiff white paper; pop a glass/bowl over the top of them to stop the spores drifting in air currents; and, then leave undisturbed for at least a few hours, if not overnight for the print to develop. Damp conditions keep the caps moist and help with the release of the microscopic spores. I left mine outside under a heavy Pyrex pudding basin, but a damp swab of cotton wool works well too. 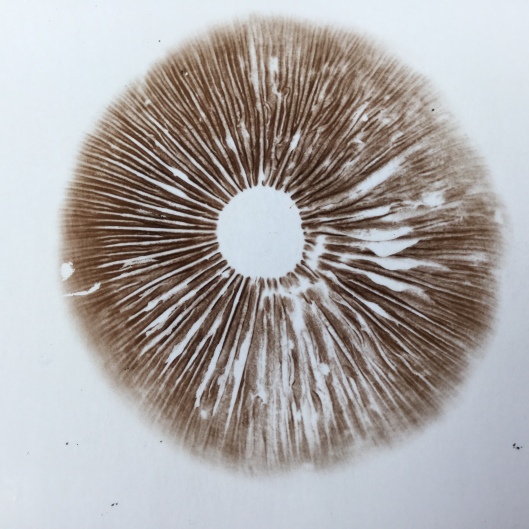 The following morning I rushed out to see if It had worked. Attempting to lift the first cap as carefully as I could by hand smudged the print, the second I skewered with pointed tweezers. I was amazed at the number of spores that had been released. Apparently, they can be fixed as a keepsake. Now, where’s the hairspray?