In 2015 I started growing a stock of Sesleria autumnalis with a view to edging the little meadow with a band of bright foliage. This is a low growing grass, said to be usually evergreen and endowed with eye-catching lime green foliage. As a European native sesleria is very easy to grow in UK gardens, either in full sun or part shade – as long as the soil is not too wet.

Chartreuse coloured Sesleria autumnalis is one of Piet Oudolf’s signature grasses, here used at Oudolf Field at the Hauser and Wirth gallery, Bruton in Somerset.

Most other members of this useful and underrated family of grass, like blue leaved Sesleria caeruela, can be grown easily from seed, but not this one.

Sesleria autumnalis seed is difficult to germinate, rather than fret over dud seed trays I ordered 24 9cm pots from Knoll Gardens. However, enjoying a gently spreading habit, sesleria can be divided sooner rather than later 😉. This also makes it a wonderful ground cover plant.

The young plants were planted out in three 8’x4′ raised beds, 1 month from purchase.

Although autumn was in the air the plants in the nursery beds grew vigorously from day one, as you would expect from a typical cool season grass that has just woken up from its summer siesta. Above is what the same little plants looked like just a month later.

By the following spring the beds were filling out nicely, when the poppies bloomed in June you’d never have guessed they’d only been planted the previous autumn. This grass has two periods of active growth – spring and autumn – either of which is a good time to propagate it by division. I aim to split each plant into at least three fist-sized divisions in early autumn 2017, pot them up into a gritty loam mix and then transplant them when the meadow is strimmed in mid December. Now, the general rule is not to cut evergreen grasses down but this is an exception : so far, I have cut second and third year plants back quite hard to refresh the foliage in both spring and autumn without setting them back. 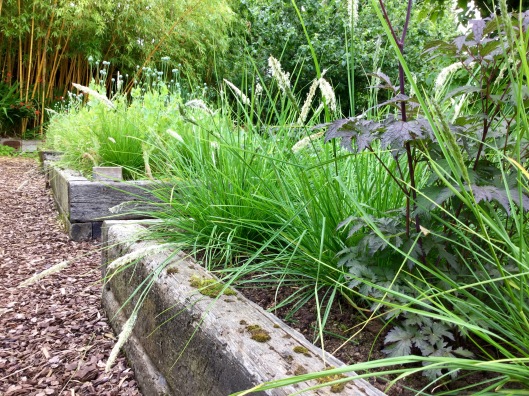 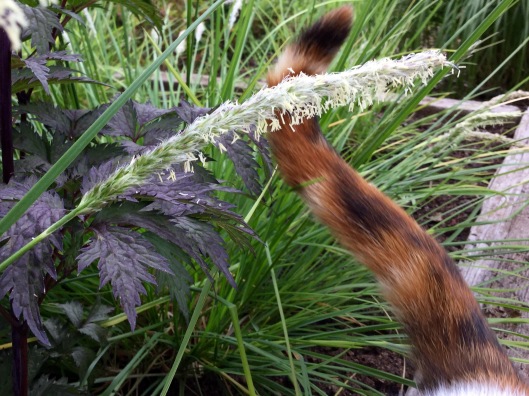 Fresh inflorescences are laden with loosely held silky stamens that quiver in the slightest breeze (or swish of the cat’s tail).

As they age the flowering spikes shrink, turning tan in autumn and darkening on damp days. Through the autumn and late winter the effect is like a volley of tiny rockets shooting across the increasingly sharply coloured yellow-green foliage. 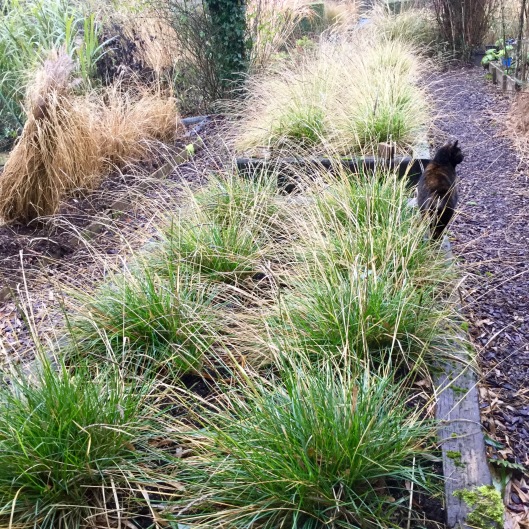 In mid February 2017, when I came to cut them down, the plants still looked remarkably green.

Primarily, I’m growing this grass for the colour of the foliage plus size and shape. My hope is that the addition will achieve two things : draw the eye down from the swirling mass of Molinia caerulea subsp.arundinacea, and, conceal the scruffy thatch of Deschampsia cespitosa. 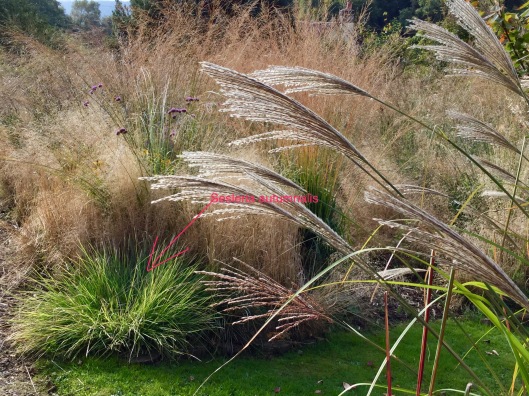 When I planted the meadow in the spring of 2015 I placed one 2 litre pot of Sesleria autumnalis on the most prominent corner of the meadow where I could keep a close eye on things. Looking at this photograph taken in October 2016, I wonder if you think the combination works?

37 thoughts on “Sesleria autumnalis : A New Grass for the Little Meadow?”