One of the most graceful and glamorous of the early summer flowering ornamental grasses in my garden is Lamprothyrsus hieronymi. Apparently, the genus name comes from the Greek “lampros” and ‘thyrsos’ meaning ‘splendid ornamental wand’ and, as far as I know, this grass is rare in having no other common name.

Who knows, with a wand in hand, we might enjoy a dry, sunny but not too hot NGS day this year. So, this plant profile is by way of a bit of grassy wand-waving.

The nodding, feathery flower spikes are made up of a mass of light reflecting filaments that are silky to the touch. From June to July they are produced in such generous quantities that the whole plant seems to sparkle across the garden. Held atop slender 4′ long wand-like stems that flex in the breeze, the 12″ long spikelets shimmer in a most beguiling way.

With a weeping habit this grass in full flower has the 8′ wingspan of an albatros. Even so, it doesn’t swamp the shrubby neighbours enveloping the grass or the pot in which it’s grown. To the left is a usefully lax form of Phlomis fructicosa I got from Waterperry Gardens, and, to the right an elderly burgundy coloured cotinus inherited with the garden.

By August, with seed spent, the grass assumes a less showy silhouette. The 2′ by 3′ tightly compact mound of evergreen foliage droops to conceal the 50 litre terracotta planter. The glossy leaves are about 3′ long, narrow and coloured a bright, fresh green. Unlike some evergreen grasses, the surface and edges of these leaves are smooth. Over winter a few naturally die back but come spring these require little more than a quick tug to tidy them up along with the wispy spent flowering stems. Sadly, so far, there are no signs of any self-seeded babies😔.

Like many grasses, this South American beauty prefers well-drained soil and to be grown in a reasonably sunny, open site. Despite its exotic looks, this grass has proved fully hardy to -10 C, even when grown in a pot which usually makes a plant more susceptible by -5 degrees. In my garden this grass grows well in a west facing spot. As this area is overshadowed by tall trees it benefits from only 4 hours of direct afternoon sunlight.

Given the extraordinary beauty of this grass I am surprised it’s so seldom seen in cultivation, really it should rank alongside other early summer flowering beauties like Stipa gigantea or Chionochloa conspicua. Nor, does there seem to be much written about it – even on the internet, references and images are frustratingly few and far between. In the Cotswold Garden Flowers catalogue shown above, Bob Brown notes that Lamprothyrsus is a “dwarf pampas grass”. Maybe this attribution stems from the labelling of Enrico Banfi’s images as Cortaderia hieronymi? Gazing at the details of this grass, the botanical allusion escapes little old me. Whatever the case, my inspiration for squeezing this very light, airy and beautiful grass into a porous pot came from reading Noel Kingsbury’s post Salta Province – Argentina’s California? (December 2012). There’s even a fab photo of it growing in the wild, tumbling en masse down a steep sided slope. Noel recommends Lamprothyrsus hieronymi to be a “really good grass”, and, I agree. I think it’s well worth tracking one down via the RHS Plant Finder.  Living in South Gloucestershire, my closest supplier stocking this choice grass in 2017 is Nick Macer of Pan Global Plants :

Growing improbably large, erstwhile “refined” plants for an improbable number of years in outsized pots is one of my passions. If quizzed by horrified horticulturalist about how I get away with such mistreatment, I admit that while this can be a challenge it’s one that I’ve long enjoyed. Depending on the plant in question, ongoing maintenance can be an issue, especially in the summer months. I think that these challenges can be addressed by the addition of a few lucky charms at the preparation stage. 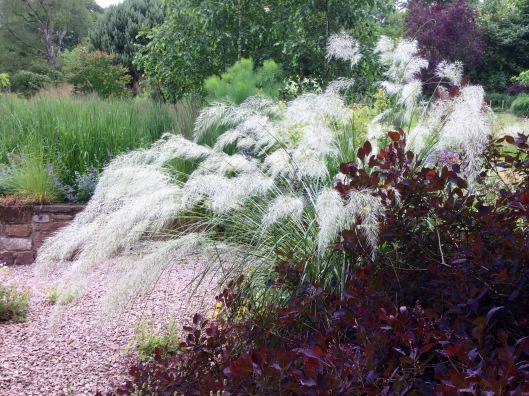 Over the last several years, this museum quality specimen was repotted – but only  twice – just frequently enough to get a good sized root ball going. Once established it was repotted for a third time into its ‘forever home’. For mature grasses in general, I use a 3 to 1 mix of weed-free, sterile loam, plus a generous helping of fine horticultural grit and a couple of trowels of slow release feed. Finally, the plant is treated to a top-dressing of grit.

Tip : hydroleca should be pre- soaked to hydrate the pebbles before use. 😉

Rather than use gloopy hydrating gel, which I think sours soil/compost forever, I fill the bottom third of planters with magical clay pebbles as an additional drainage layer above an inch of crocks. The hydroponic properties of products like Hydroleca are incredibly useful for any plant indefinitely confined to pot life because the malteser-like balls act as a reservoir for both moisture and nutrients. (This lightweight product is much better value if ordered in 75 litre sacks, and, as it can be washed for reuse, it’s a good investment too.)

If picked at this freshly opened stage, grasses make fine dried flowers too.

With Sunday’s weather in mind, perhaps I should wander off flourishing this splendid grassy wand while intoning “Lamprothyrsus hieronymi!” with the same gusto as “Abracadabra!'”? I shall let you know whether or not the spell worked next week 😉.