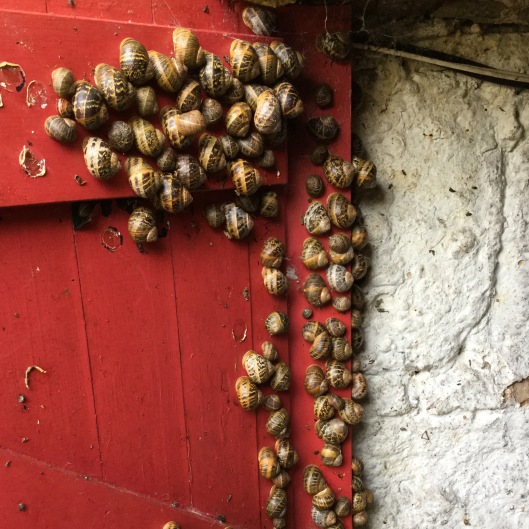 Clusters of hibernating Helix aspersa glued to the back of the door ….

… and welded to each other.

Right now, the purple tinged inflorescences are loaded with pollen which is of a relatively low nutritional value to bees. 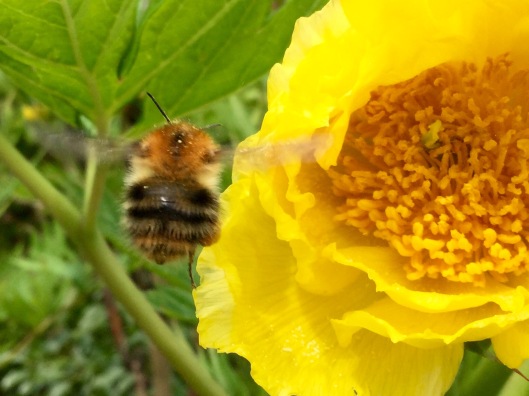 Thursday was such a blissfully warm, sunny and still day that, for the first time this year, I had my lunch outside. I always count this as an important milestone on the road to spring and it’s nice to have company to help celebrate its passing. This year, the company was very special : honey bees!

Conditions were perfect for the bees too, they’d come out to gather, what is I’m told, up to half their body weight in pollen and nectar from the swathe of crocus tommasinanus that have taken over the lawn between both sets of gates. Whoever planted them did so a long time ago, as they have spread throughout the front garden.

To my delight, these cheerful purple ‘tommies’ that are so beloved by bees pop up everywhere. Like most gardeners, I’m concerned about the plight of our pollinators and keen on growing as many insect friendly flowers as possible, be they wild or cultivated. I think it’s marvellous that more and more people are becoming beekeepers – including one of my brothers. His enthusiasm and yearly pot of ‘happy bee’ honey was infectious and for a while we considered keeping bees of our own, after all, the surrounding wild flower meadows and the flowering perennials, shrubs and trees in the garden are perfect for many beneficial insects. Through our friends and our local garden society we found out that grants are available to help prospective beekeepers train and set up hives – I’d even sourced a fetching lavender coloured bee suit with matching headgear. We were all set to go!

What stopped us was the discovery that we already had two colonies of ‘wild’ bees in cavities in the disused outbuildings. This was pointed out to us on our very first NGS open day by a visitor who also happened to be an experienced beekeeper. He suggested that we might have the bees moved into hives, or, if they weren’t in our way leave them to their own devices and monitor them discretely. I had a go at videoing them earlier in the week in slow motion, it seems to have reverted to real time. As this is the first time I’ve tried to include one in my garden journal, I have no idea if the clip above will play back when clicked to view.

We learned a lot from this visitor as well as the local expert with whom he put us in touch. Colonies of this sort are usually feral, having swarmed from hives. Colonies of the truly wild, native black bee of the sort tended to by Queenie in Flora Thompson’s Larkrise to Candleford are extremely rare, perhaps even extinct in the UK. This is not only because of a century of various bee diseases but, more significantly, because bees are outbreeders, the queen mates with a large number of drones in flight. As different races of Apis mellifera mellifera have been introduced into the UK from various parts of Europe since the 1830s, the chances of maintaining a ‘pure’ colony of native bees is slight. 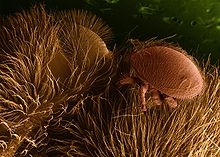 All this aside, feral colonies, which may help in the international campaign to bolster the decline of healthy bee populations, are in jeopardy too. In 2014 Dr Catherine Thompson was set to publish her study of such colonies, she showed that they were often infected with the Varroa Virus caused by the Varroa destructor mite, as these are disease burdens prevalent among untreated managed colonies she deduced that they had been transported with the bees when they swarmed from captivity. The inference of her research is that beekeepers have a great responsibility for ensuring the health of colonies of bees and, by extension, feral bees too. Dr Thomson estimated that a badly infected feral colony of bees would be unlikely to survive for more than three years. 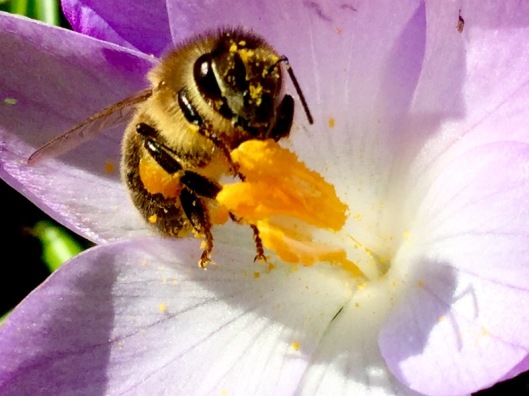 Varroa mites cause Deformed Wing Virus in bees which affects their ability to gather supplies for the nest. Once infected, its effects are more virulent in colonies that are either managed but untreated or feral than it is in managed but treated colonies. Apparently, these tiny bees have to beat their wings at a mind boggling rate, something like 200 beats a second to sustain flight. Not only do they beat them, they twist them too creating a propellor motion – hence their amazing manoeuvrability. If this sort of endeavour fascinates you there’s a fabulous slow motion clip of a minute or so from the BBC Hive Alive series here. 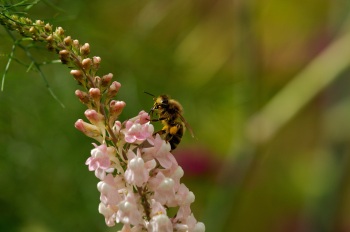 With all this in mind we watch our bees with interest and concern, keeping our fingers crossed that the colonies will make it through another year. We can’t be sure when the bees arrived, we can only speculate. There was a swarm in an apple tree back in 2010 which had moved on by the time a local Swarm Collector arrived, perhaps that accounts for one of them. The building they occupy has been unused for a generation, so it would be nice to think a colony has lived there unnoticed for a long time. Who knows, maybe our dear friend Chris Williams who came to shoot insects in the garden last summer caught Barn House bees in action? Above is a selection of his beautiful images.

This weekend bees in general are topical in Saturday’s The Telegraph, with Val Bourne’s ‘Give a bee a home’ and it seems this an appropriately timed article. In the Weekend section, ‘Confessions of a Valetine’s Veteran’ we’re reminded that he was the patron saint of bees too.